(The Center Square) – Culture, bias, diversity, inclusion and prejudices are buzzwords punctuating new guidelines being put in place to certify educators in Pennsylvania.

The changes to and implementation of the new certification process has been nearly five years in the making, inclusive of legislative committee endorsements and public comment.

Integration of Chapter 49 competencies and standards in the field – education prep programs, induction programs, and continuing professional development programs – will be in place by the end of the 2024-25 academic year. It is a process that began in 2018 under the leadership of former Secretary of Education Pedro Rivera, and is now led by interim Secretary Eric Hagarty. It includes details from the Nov. 9 meeting where the Education Department received unanimous approval on the implementation progress from the Teacher and School Leader Effectiveness Committee.

Among the inclusions, potential educators will have to acknowledge bias exists in the education system, and they are to “disrupt harmful institutional practices, policies, and norms by advocating and engaging in efforts to rewrite policies, change practices, and raise awareness,” according to the framework guidelines for the Culturally-Relevant and Sustaining Education Program. 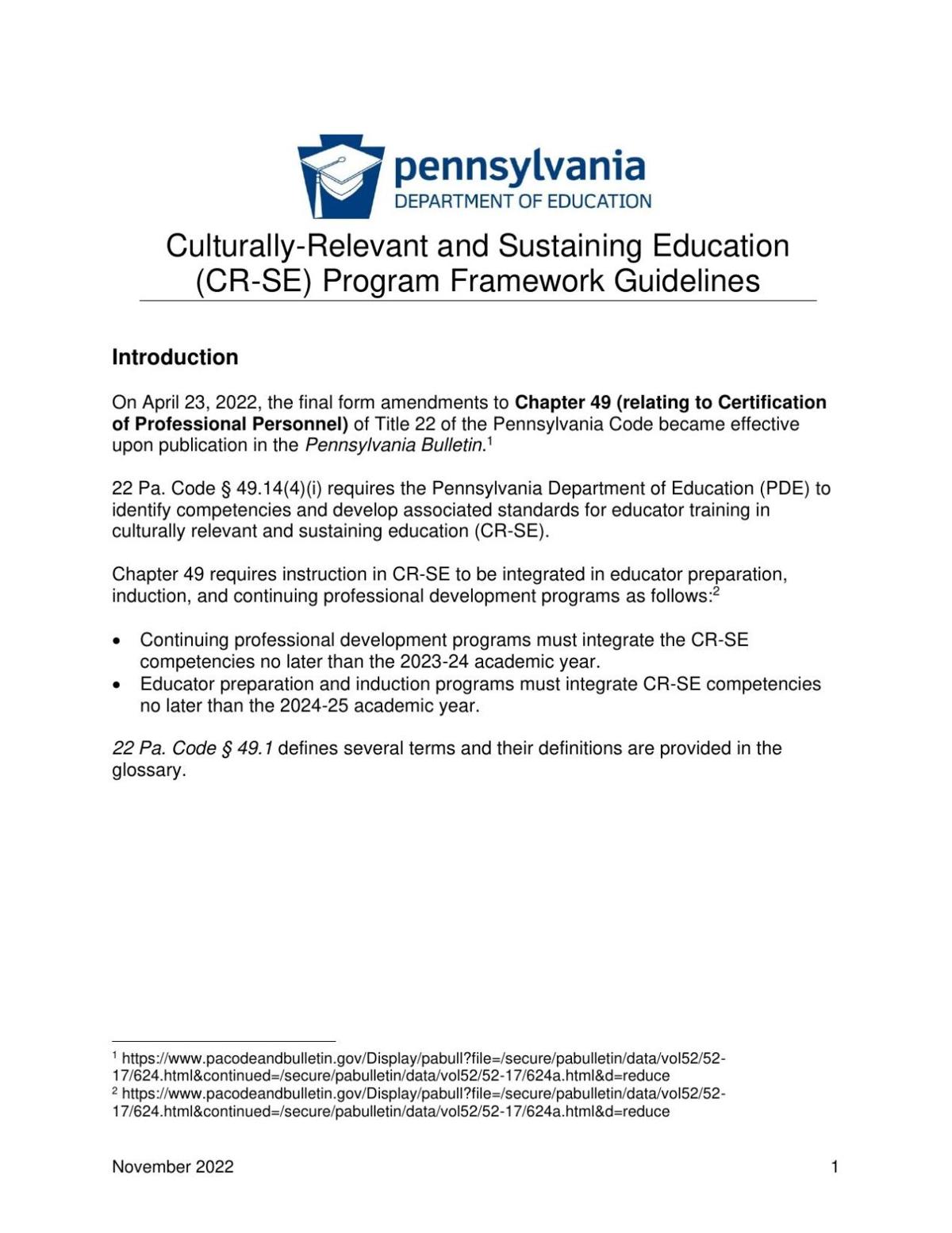 Chapter 49 is the certification of professional personnel. Rivera recommended amendments to it in 2018, and the process is now at the cusp of full implementation. The route to this point has included public comment periods across the state, and approvals from the Council of Higher Education, the Senate Education Committee, the House Education Committee, and the Independent Regulatory Review Commission. 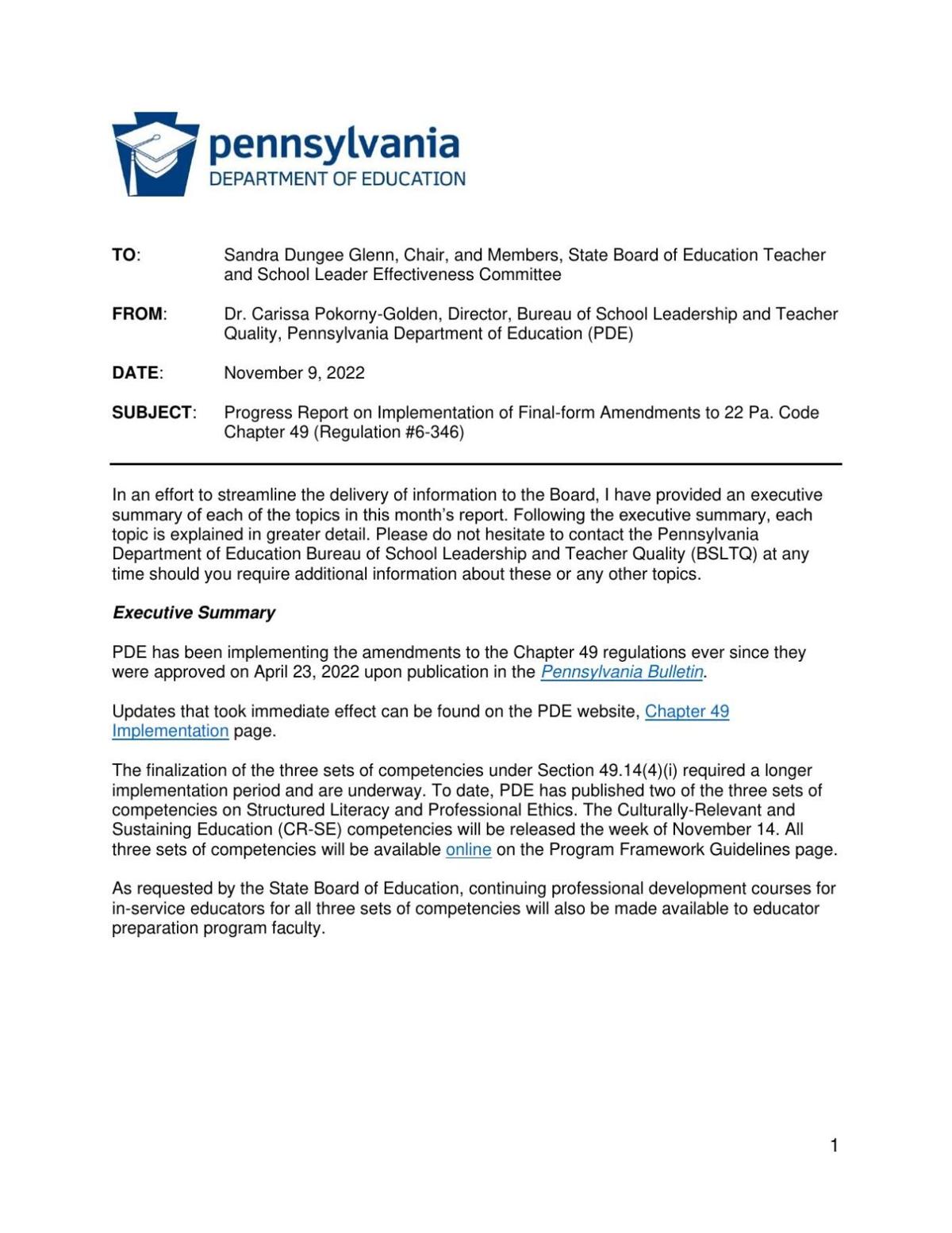 Nine competencies have been put together. Descriptive terms utilizing “culture” or “bias” is headlined in four of them, and bias is a theme getting more detail in each of the first five.

According to the attached glossary, Pennsylvania’s CR-SE is defined as “education that ensures equity for all students and seeks to eliminate systemic institutional racial and cultural barriers that inhibit the success of all students in this commonwealth – particularly those who have been historically underrepresented.”

The politically charged term “critical race theory” is not mentioned. That is a framework nearly 50 years old that centers on the idea that racism is systemic in the nation’s institutions, and that those institutions maintain the dominance of white people. It is often linked to any teachings in K-12 education related to race, particularly if schools address diversity and inclusion. Critics say it is an attempt to rewrite history, with the belief white people are inherently racist.

The Pennsylvania Department of Education document does include language – in addition to culture and bias – related to diversity, inclusion and prejudices. Engagement with families is encouraged; topics are within the standards that could run counter to the faith of educators.

An example of the latter is in the sixth competency. Educators are to “collaborate with families and communities through authentic engagement practices.” This includes a standard that says, “Identify systems, structures, practices, and policies that exclude and marginalize BIPOC and multilingual families, families living in poverty, and families with varying sexual orientation and gender identities.”

BIPOC is an acronym for Black, Indigenous, and people of color.

Acknowledgement of bias in the system is found in the second competency, “Identify, Deepen Understanding of, and Take Steps to Address Bias in the System.” The first standard is to “know and acknowledge that biases exist in the educational system.” It goes on to say educators should “identify and make efforts to remove bias in their teaching materials, assignments, curriculum, and resource allocation.” A final standard is to “disrupt harmful institutional practices, policies, and norms by advocating and engaging in efforts to rewrite policies, change practices, and raise awareness.”

The fifth competency, “Promote Asset-based Perspectives about Differences,” encourages recognition of “diversity as an asset to the entire learning community and treat it as such.” It advises to “show respect for every BIPOC learner, educator, educational leader, and family across cultural, racial and linguistic differences.”

Alan Wooten has been a publisher, general manager and editor. His work has won national or state awards in every decade since the 1980s. He’s a proud graduate of Elon University and Farmville Central High in North Carolina.

How Living Off the Grid in Pennsylvania Compares to Other States

This Is the Average ‘Time-to-Crime’ for Firearms in Pennsylvania

This Is the Poorest Town in Pennsylvania