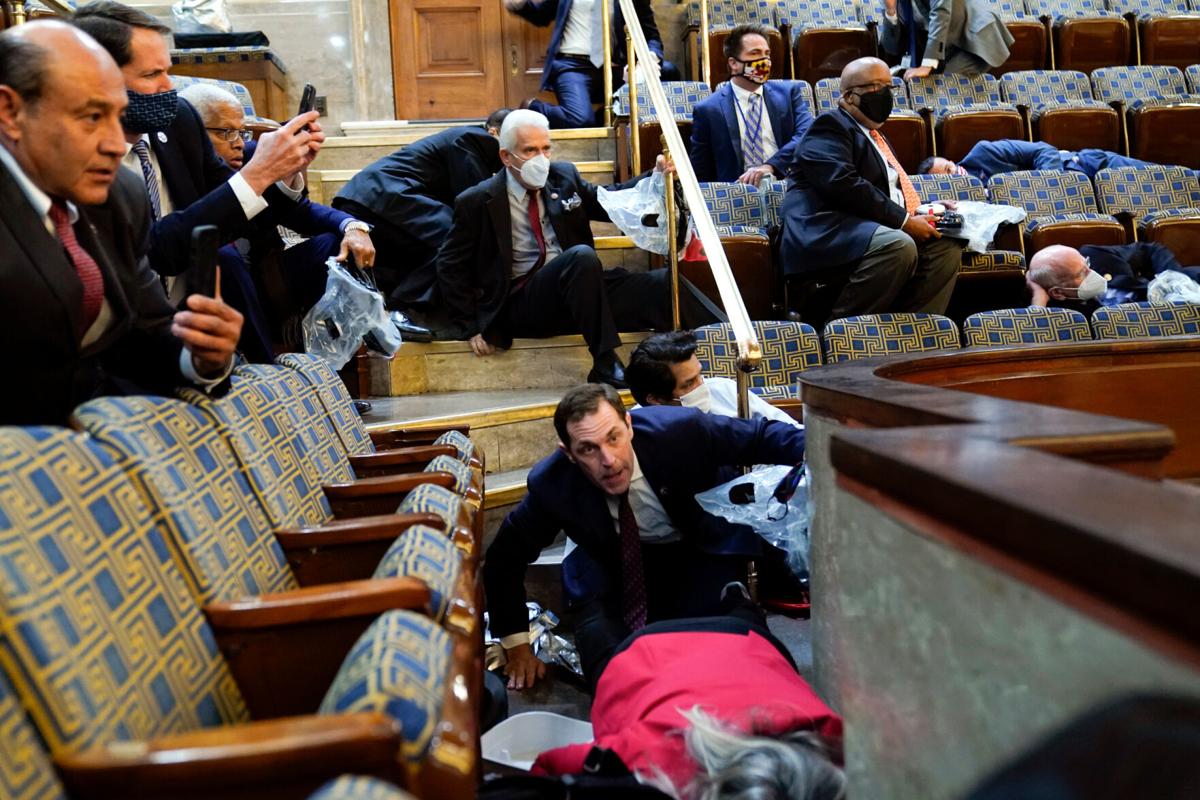 People shelter in the House gallery as a mob of people tries to break into the House Chamber at the U.S. Capitol on Wednesday, Jan. 6, 2021, in Washington. 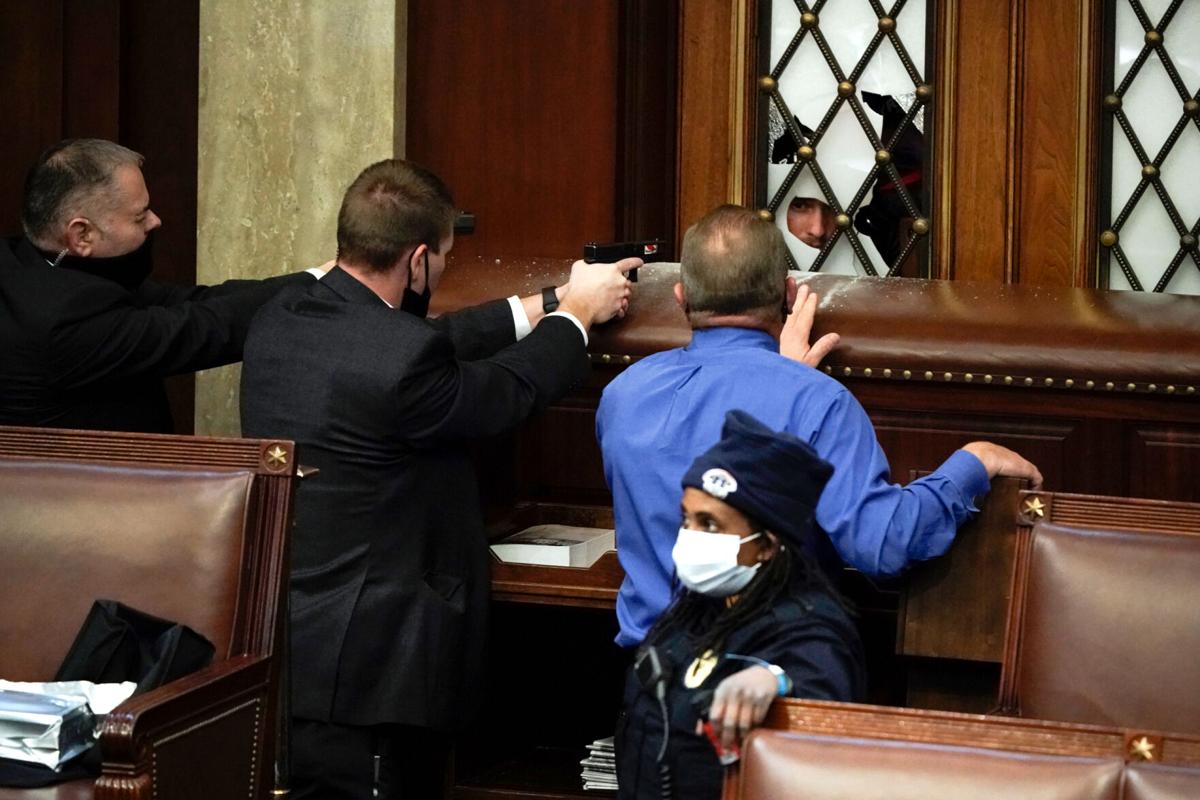 Police with guns drawn watch as protesters try to break into the House Chamber at the U.S. Capitol on Wednesday, Jan. 6, 2021, in Washington. 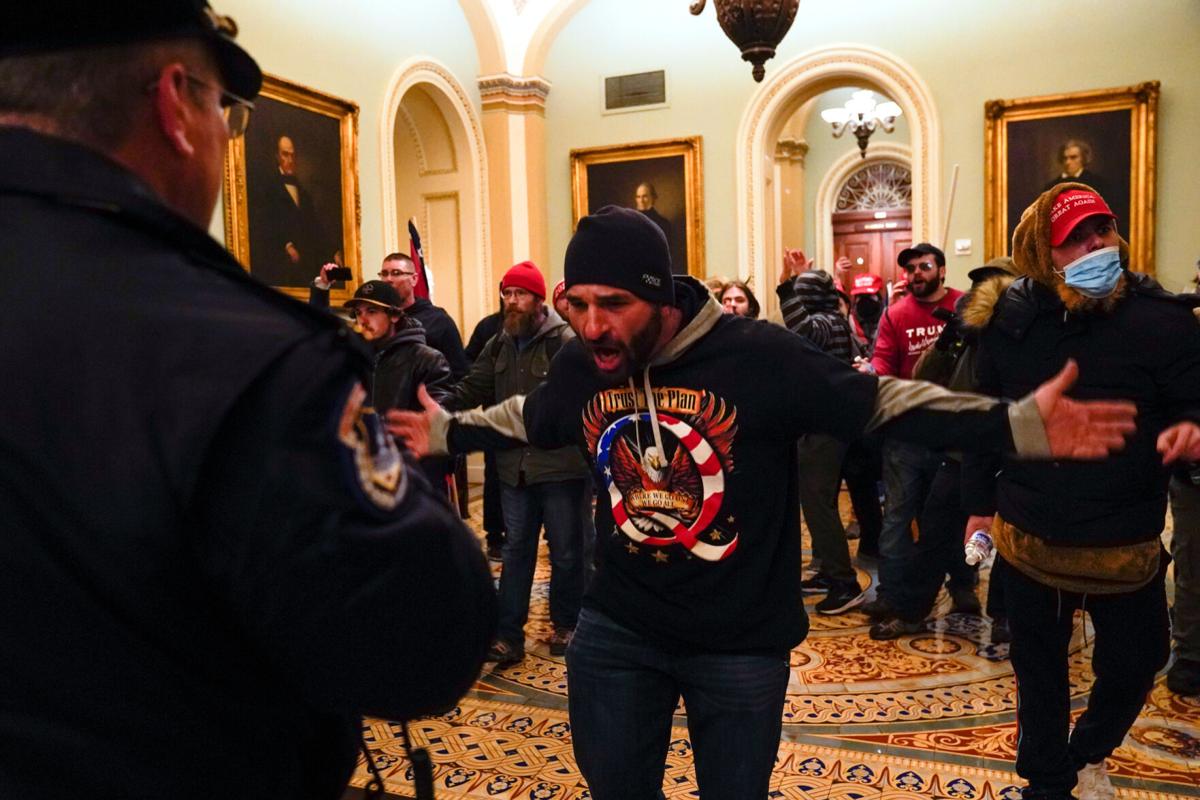 Protesters gesture to U.S. Capitol Police in the hallway outside of the Senate chamber at the Capitol in Washington, Wednesday, Jan. 6, 2021, near the Ohio Clock.

People shelter in the House gallery as a mob of people tries to break into the House Chamber at the U.S. Capitol on Wednesday, Jan. 6, 2021, in Washington.

Police with guns drawn watch as protesters try to break into the House Chamber at the U.S. Capitol on Wednesday, Jan. 6, 2021, in Washington.

Protesters gesture to U.S. Capitol Police in the hallway outside of the Senate chamber at the Capitol in Washington, Wednesday, Jan. 6, 2021, near the Ohio Clock.

(The Center Square) – The U.S. Capitol was transformed into a shocking scene Wednesday as supporters of President Donald Trump stormed the building, overwhelming police officers and sending the nation's lawmakers fleeing.

The violent scene played out in Washington, on TV and across social media as the Congressional session that had convened to count the results of the Electoral College came to an abrupt halt.

Hundreds of protesters were shown on TV news coverage walking through Statuary Hall without having gone through any security checkpoints. Debate was halted, and lawmakers were ordered to return to their offices and shelter in place. Legislators were told they may need to hide under their chairs and to be quiet and not draw attention to themselves.

Protesters are fighting with Capitol Police and Secret Service within the capitol building. pic.twitter.com/NiJq8huKl2

Vice President Mike Pence and some lawmakers were evacuated from the building, and media reports indicated that there was an armed standoff between law enforcement officials and invaders. Photos from inside the House chamber showed police with guns drawn.

As his supporters continued to wreak havoc for hours Wednesday afternoon in and around the Capitol, the president was largely silent, aside from a pair of tweets asking them to remain peaceful and respect law enforcement.

Trump finally decided to make a formal statement shortly after he was called on to do so by President-elect Joe Biden. In a recorded video, Trump began by repeating his claims that the election had been stolen from him and that he had won by "millions of votes."

He made clear that he supported the aims of those who were breaking into the Capitol, and he didn't condemn their actions, simply saying "we have to have peace."

Biden, in live remarks just before Trump's, took a more critical stance toward the invasion of the Capitol, saying that their behavior did not reflect American values.

"This is not dissent, it's disorder," he said. "It's chaos, borders on sedition, and it must end now. I call on this mob to pull back and allow the work of democracy to go forward."

Video from the inside of the chamber. Guns drawn. pic.twitter.com/yKaICDBdj7

Meanwhile, lawmakers were preventing from continuing their work, many of them having been escorted from the Capitol grounds or taking shelter within the complex.

"My staff and I are safe and have been brought to a secure location by the Capitol Police," said U.S. Rep. Nicole Malliotakis, R-N.Y. "Everyone who is responsible for this violence and lawlessness must stop. This is absolutely unnacceptable and un-American."

One person was shot at the U.S. Capitol during the confrontation with protesters. Police later confirmed that a woman had died from a gunshot wound.

CNN aired an image that appeared to show a protester sitting in the chair from which Pence had been presiding over the Senate session, and similar images were circulating on social media.

The protesters appeared to have come from a rally earlier in the day in which Trump condemned, as he has repeatedly since November, the results of the Nov. 3 election that made Biden the president-elect.

Rioters have surged onto the US Senate floor. pic.twitter.com/VAibib2Mbz

Capitol Police put out calls to several other agencies to provide assistance after getting overrun, and Washington, D.C., Mayor Muriel Bowser has put in place a 6 p.m. curfew and asked for the Washington, D.C., National Guard to be called up.

Virginia Gov. Ralph Northam said he was sending members of the Virginia National Guard along with 200 Virginia State Troopers to Washington at the mayor's request. About 1,100 D.C. National Guard troops were also being activated, a Washington Post reporter said.

Pence took a strong stance against the protests early in the afternoon, telling the demonstrators that they needed to leave the building.

"The violence and destruction taking place at the US Capitol Must Stop and it Must Stop Now," he said on Twitter. "Anyone involved must respect Law Enforcement officers and immediately leave the building. Peaceful protest is the right of every American but this attack on our Capitol will not be tolerated and those involved will be prosecuted to the fullest extent of the law."

Here’s the scary moment when protesters initially got into the building from the first floor and made their way outside Senate chamber. pic.twitter.com/CfVIBsgywK

The sight of massive crowds halting the democratic process in the nation's capital city was jarring to observers, some of whom laid the blame for the crowd's actions at the president's feet.

"This is a coup attempt," tweeted U.S. Rep. Adam Kinzinger, R-Ill. Then, addressing Trump, he wrote, "You are not protecting the country. Where is the DC guard?  You are done and your legacy will be a disaster."

U.S. Sen. Ted Cruz, R-Texas, one of the architects of an effort to object to the certification of Biden's victory, urged the protesters not to turn to violence.

"Violence is always unacceptable," he tweeted. "Even when passions run high. Anyone engaged in violence – especially against law enforcement – should be fully prosecuted."