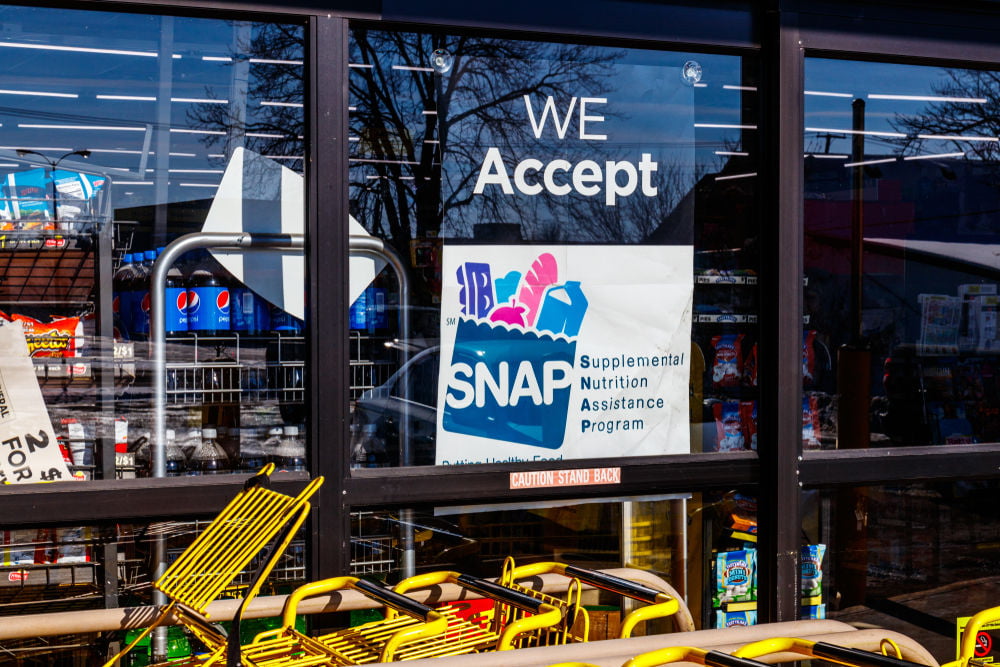 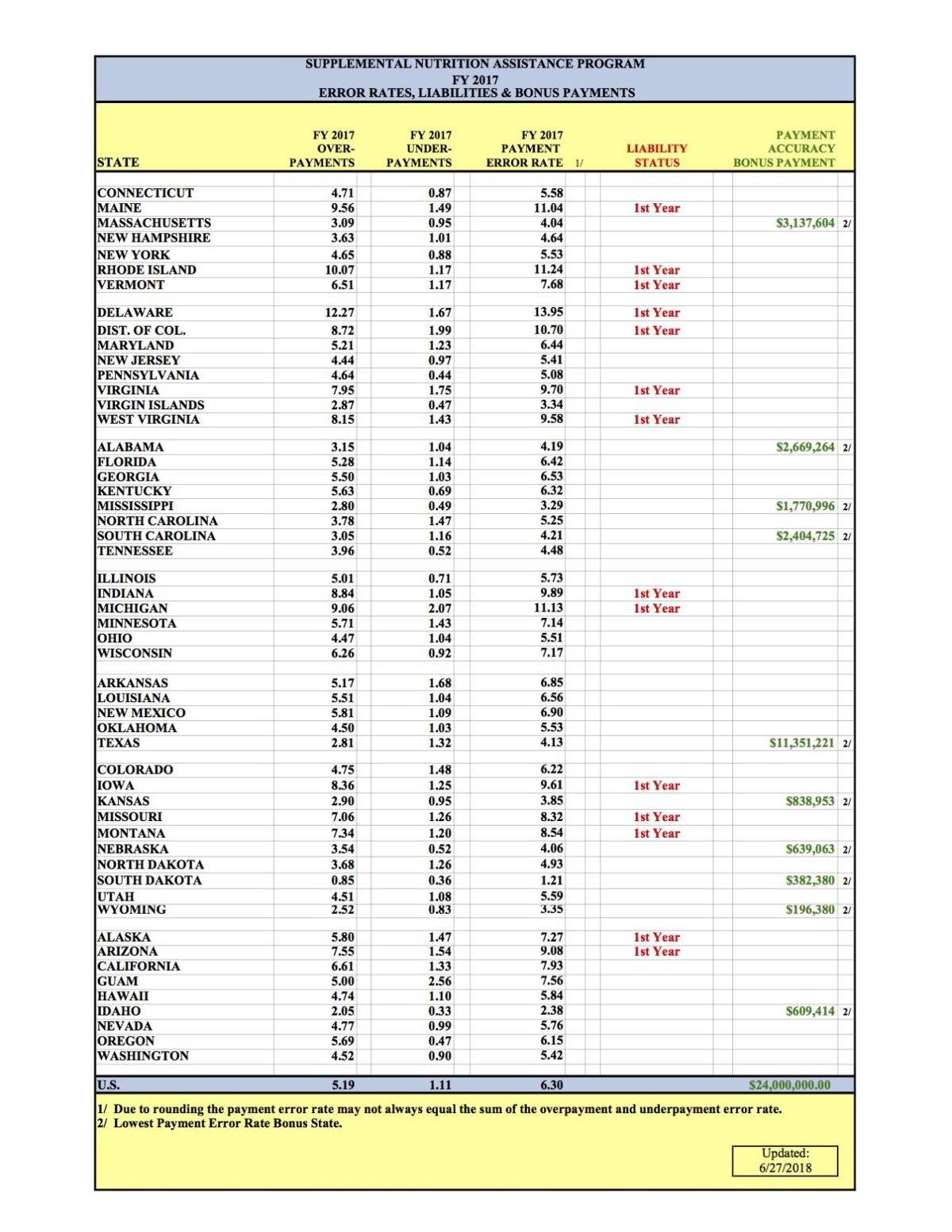 A lack of oversight by states in administering the Supplemental Nutrition Assistance Program (SNAP) is costing the nation’s taxpayers up to a $4 billion a year in awarding benefits to ineligible recipients.

That is among conclusions offered by the U.S. Department of Agriculture (USDA) in its first SNAP error rate report in three years.

The report, released Thursday, maintains there were overpayments, underpayments, or other inaccuracies found in 6.3 percent of 42 million SNAP recipients’ eligibility information in 2017, up from 3.66 percent in USDA’s last error report in 2014.

The USDA’s Food and Nutrition Service (FNS) allocated $63.6 billion in SNAP, or food stamps, assistance in 2017.

USDA Acting Secretary for Food, Nutrition and Consumer Services Brandon Lipps said the error-rate increase is not related to fraud, but the result of a revised quality control assessment it has been developing since 2014.

“The performance rates released today reflect an improved reporting process designed to provide an accurate measure of errors that can be identified and corrected to ensure taxpayer dollars are invested wisely and decisions are made based on solid facts,” Lipps said.

“The USDA is saying (the increase) is not from fraud,” said Sam Adolphsen, a senior fellow at the Foundation for Government Accountability (FGA). “I would agree, but there certainly is a significant percentage that is fraud and even administrative errors reveal a lack of oversight at the state level – actively looking the other way is government sanctioned fraud.”

Florida-based FGA is among conservative think-tanks that have been lobbying the Trump Administration to scrutinize welfare spending and require some SNAP and assistance recipients to work to retain eligibility.

“It is good for the Trump Administration to verify the accuracy of the (error) rate because they clearly have not been accurate in the past,” Adolphsen said. “The rate has often been used by advocates to show how low the level of fraud is, but it turns out that the rater was fraudulent itself.”

Adolphsen, who served three years as the chief operating officer for the Maine Department of Health and Human Services, said 80 percent of the errors were overpayments.

Overpayment and bias to approve eligibility without proper vetting in the application process and without consistent verification follow-through is a systemic result of a "when in doubt, give it out" attitude among local service agencies, he said.

“I observed the same thing in Maine,” Adolphsen said, noting the bias to grant eligibility is reinforced by "bad laws, rules, regulations that allow people to go months, years, without regularly checking their income and household circumstances in face-to-face interviews to accurately verify what people are saying about what they have in income and in their bank accounts.”

According to the USDA, in 2014 it identified inconsistencies in its quality control data that “raised concerns about the presence of statistical bias in the system across the country.”

Among the agency’s newly implemented oversight controls is training for state and federal staff, updated guidance and manuals and revised, uniform procedures to ensure consistency.

“The majority of improper payments are due to human errors,” Lipps said.

Those “human errors” most commonly occur in data entry by social workers in initial interviews with applicants, or from improper information provided by the applicant or recipient.

The report maintains 60 percent of errors are from data entry errors while 40 percent are rooted in the information provided by applicants and recipients.

A 2015 report from the USDA’s Office of the Inspector General found, among other issues, third-party consultants used by some states “encouraged hiding mistakes to keep error rates low. In some cases, that allowed states to gain bonus payments from the federal government.”

Problems such as these were found in 42 states, the USDA said. Among the most prominent examples is the $7 million settlement by the Virginia Department of Social Services in 2017 to the federal government for hiring a consultant, Julie Osnes Consulting, to reduce its reported error rate and qualify for performance-based bonuses.

Thursday’s report cites: “Performance bonuses may have incentivized states to under-report errors, as the system encourages them to compete against each other for bonus payments. USDA does not believe that states should receive bonus payments for effectively administering the program.”

Adolphsen said the USDA issued $48 million in performance bonuses in 2017 to state agencies, supposedly for efficiencies but, in reality, to “incentivize” agencies to grow their programs and hide mistakes.

“It’s absurd. It should be abolished immediately,” Adolphsen said. “The only incentives that should be awarded should be for getting more people out of these programs and into the workforce.”

“We are really glad the administration is looking closer at performance bonuses,” said Charles Katebi, state government relations manager with the Heartland Institute.

Katebi said prohiibiing states from using consultants to “game the system” to qualify for performance bonuses will “take away the source of the problem.”

The five-year omnibus Farm Bill, which will reauthorize nutrition programs such as SNAP, is being deliberated in Congress and is scheduled to be adopted by Sept. 30, before the federal fiscal year begins on Oct. 1.

The SNAP allocation is about 75 percent of USDA’s annual spending and a major component of the Farm Bill.

That number is a 4.6 percent, or 1.9 million, less than the 42 million who were receiving SNAP benefits in March 2017 and 2.6 million less than when President Donald Trump assumed office in January 2017.