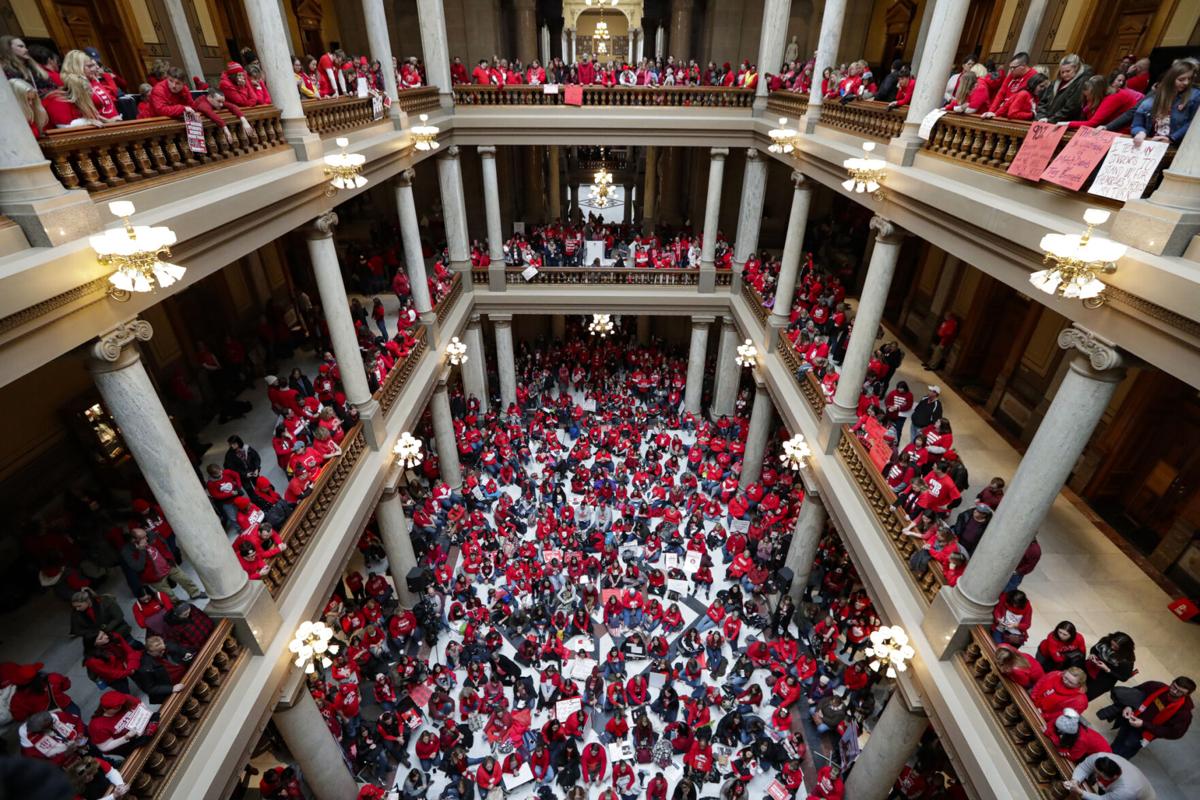 Thousands of Indiana teachers wearing red hold rally at the Statehouse in Indianapolis, Tuesday, Nov. 19, 2019, calling for further increasing teacher pay in the biggest such protest in the state amid a wave of educator activism across the country. Teacher unions says about half of Indiana's nearly 300 school districts are closed while their teachers attend Tuesday's rally while legislators gather for 2020 session. 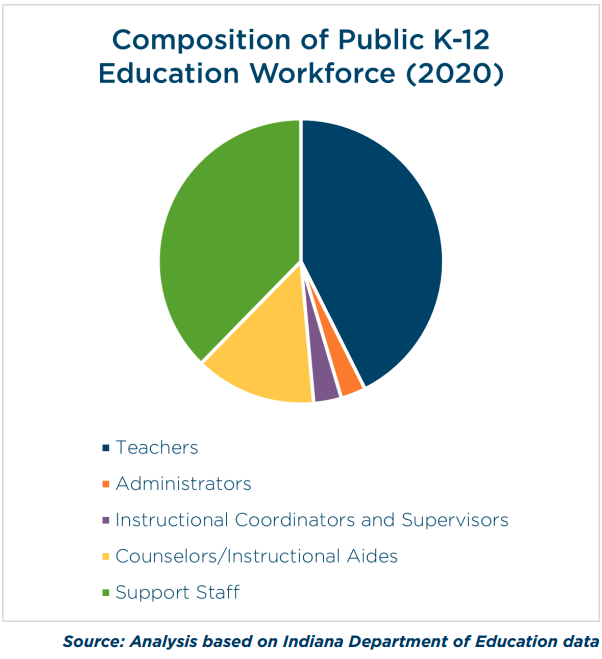 Thousands of Indiana teachers wearing red hold rally at the Statehouse in Indianapolis, Tuesday, Nov. 19, 2019, calling for further increasing teacher pay in the biggest such protest in the state amid a wave of educator activism across the country. Teacher unions says about half of Indiana's nearly 300 school districts are closed while their teachers attend Tuesday's rally while legislators gather for 2020 session.

(The Center Square) - Included in the report on Indiana teacher salaries released last week was the news that just 43% of public education employees in the state are teachers.

This is the fourth lowest in the nation -- lower than just three other states – Ohio, Kentucky and Maine.

The report, from the Next Level Teacher Compensation Commission -- appointed last year by Republican Gov. Eric Holcomb in response to the teachers union demands for higher pay – encourages school districts to look at non-teaching employees, to see if they can shift more money to teachers by eliminating any unnecessary positions.

Interestingly, the report notes that when compared to other states, Indiana does not have a high number of central office staff.

It appears to be the high number of support staff in Indiana schools that results in such a low percentage of teachers as a share of total education employees.

The Next Level Teacher Compensation Commission was chaired by Michael Smith, a former executive vice president and CFO of Anthem Blue Cross Blue Shield. It included Dan Holub, the executive director of the Indiana State Teachers Association, and Katie Jenner, the incoming Secretary of Education, as well as a math teacher, a school principal, a school board member and three former corporate executives.

The members of the commission recommend school districts in Indiana “Right-size district teacher and staff ratios where appropriate” by reducing non-teaching positions, where possible, and use the savings to raise teacher salaries.

The report recommends raising starting pay for teachers in the state to $35,000 by 2021 and to $40,000 by the fall of 2022, and includes this recommendation under the heading of “policy change” – indicating that they want the state to set minimum teacher pay requirements.

Overall, the report emphasizes actions that school corporations can take to raise teacher pay, saying that the state will likely not be able to contribute most of the increase in funding needed to raise teacher salaries, given that reserves have been depleted during the Covid-19 pandemic.

“Increasing education funding, by itself, should never be viewed as a complete solution,” the report says.

The commission recommends local school corporations do several things to lower costs in order to pay their teachers more.

On the recommendation to “right-size” teacher and staff ratios, the report says the following: “Schools should do all they can to identify efficiencies and reduce non-teacher salary costs. Staff compensation accounts for a majority of school expenditures, so the personnel makeup of school corporations is worthy of special attention.”

The state of Indiana spends $7.5 billion on direct payments to K-12 schools, an amount that equals about half of the total state budget. The majority of this -- $5.92 billion – goes to wages. The amount of this that goes to student academic achievement (mostly teaching salaries) decreased by 1.2% since 2010, according to the report’s findings, while the amount going to “school administration” or “corporate administration” increased by 16.7%.

The state of Indiana has budgeted $7.5 billion for direct payments to K-12 schools this year. This represents an increase from the $7.3 billion spent in the 2019-2020 school year.

“Increasing education funding, by itself, should never be viewed as a complete solution [to the problem of low teacher pay],” the report says. “Indeed, much of the responsibility for suppressed growth in teacher pay rests with school spending. Like any large-scale enterprise, schools can and should do more to find efficiencies and cut non-teacher costs.”

“This decrease equates to nearly $300 million annually that could otherwise be used for classroom expenses and teacher pay,” says the report.

This is the Average Tax Refund in Indiana

This is How Much Teachers are Paid in Indiana

This is the City in Indiana With the Most Billionaires

This is the Most Iconic Job in Indiana