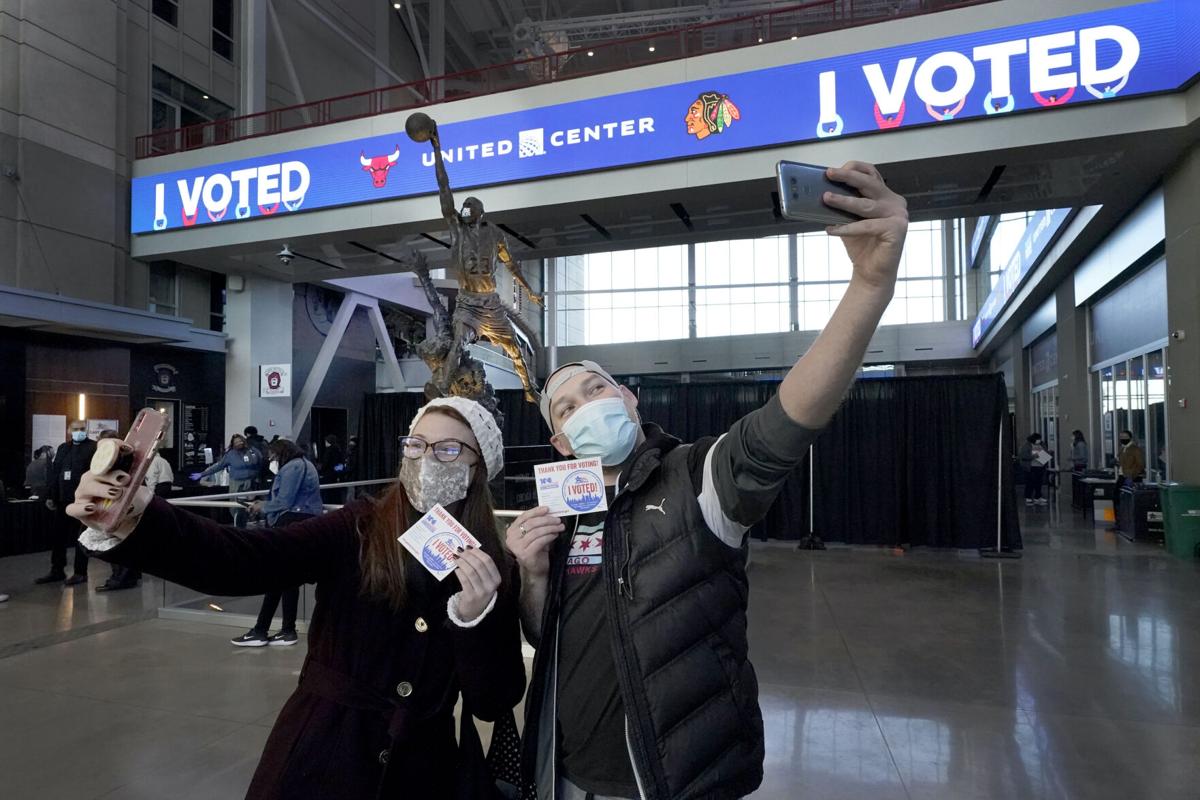 Samantha Jones, left, and Peter Vina take selfies near the Michael Jordan statue Tuesday, Nov. 3, 2020, in the atrium of the United Center, transformed into a super voting site in Chicago. 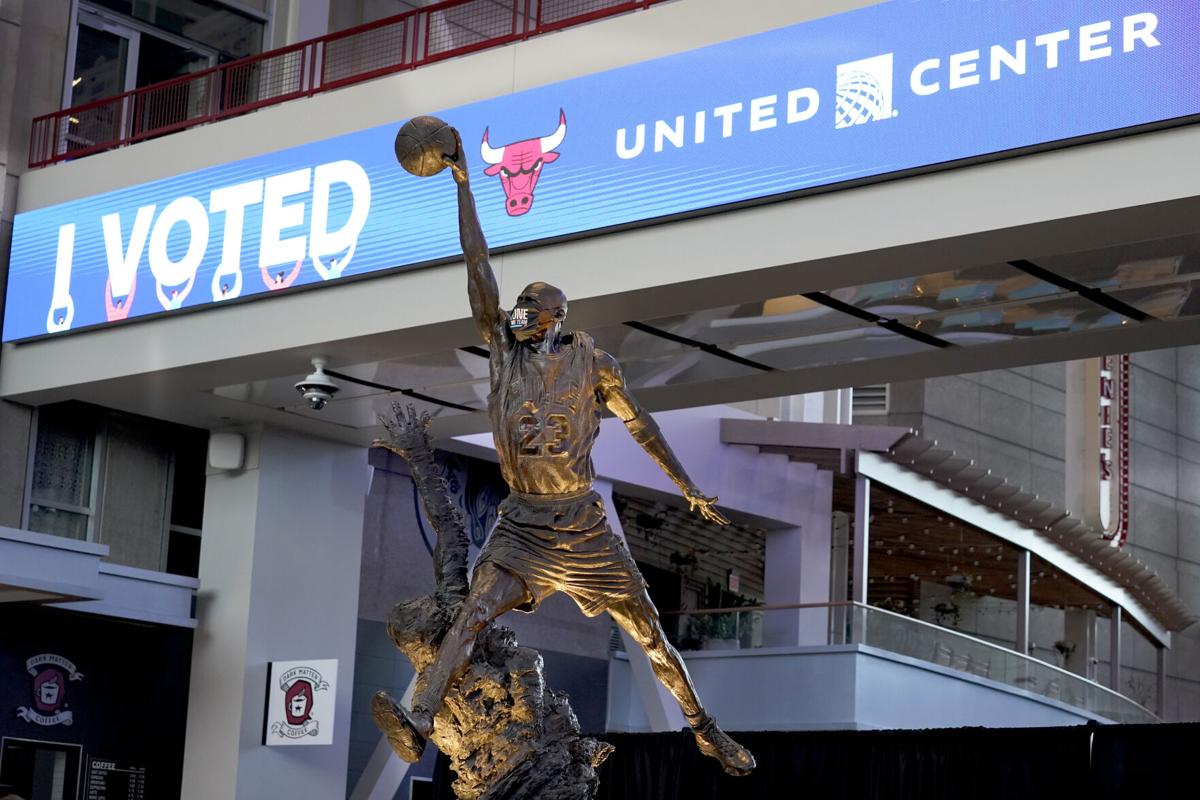 The Michael Jordan statue stands in front of an "I Voted" banner on Election Day, Tuesday, Nov. 3, 2020, in the atrium of the United Center, transformed for the first time into a super voting site in Chicago.

Samantha Jones, left, and Peter Vina take selfies near the Michael Jordan statue Tuesday, Nov. 3, 2020, in the atrium of the United Center, transformed into a super voting site in Chicago.

The Michael Jordan statue stands in front of an "I Voted" banner on Election Day, Tuesday, Nov. 3, 2020, in the atrium of the United Center, transformed for the first time into a super voting site in Chicago.

For the first time in history, Illinoisans voted to not retain a sitting Supreme Court justice, according to the group Citizens for Judicial Fairness.

While many local races are more clear, races for seats in the U.S. Congress or Illinois statehouse races are still too close to call.

There are potentially hundreds of thousands of vote-by-mail ballots that are still in transit to local elections officials. Those will be counted over the next two weeks as long as they are postmarked Nov. 3.

Illinois State Board of Elections spokesman Matt Dietrich said things will become more clear over the next few days. While it’s still not clear, some outcomes could be challenged. The process of challenging an election outcome isn’t automatic. Dietrich said it requires a lawsuit.

“And you have to go to court, and you have to tell a judge why you believe there should be a recount in your race. You have to first conduct what’s called a discovery recount where you can go in and look over a certain number of ballots in a certain number of precincts and then that gives you the evidence you can present to a court why you believe certain votes for you were mishandled, they were not counted, they need to be looked at again,” Dietrich said. “It is a very elaborate legal proceeding and it’s very, very expensive.”

9:12 p.m. Too close to call for some U.S. Congress races in Illinois

It’s still too close to call for a number of Illinois congressional seats.

Some projections show incumbent Democrats winning in several races, but the count is still ongoing in the 6th Congressional District between incumbent Sean Casten and Republican challenger Jeanne Ives.

“I think that we have shown people what can be done with a little organizing and some hard work and some investment and showing up for people and the model we’re going to continue forward with,” Underwood said.

In the 13th Congressional District, U.S. Rep. Rodney Davis was eyeing a victory earlier in the day.

“But in the end, I just appreciate the opportunity to serve as your member of congress,” Davis said. “I’m looking forward to the results, and I’m looking forward to a victory tonight and being able to go back for two more years to represent the 14 counties in central Illinois and southwestern Illinois.”

Illinois’ 20 electoral votes are expected to go to former Vice President Joe Biden, according to the New York Times.

That is in spite of several counties outside of Cook and the collar counties going for Trump.

“There’s a big, big discrepancy between the vote-by-mail totals which overwhelming favor Democrats and the in-person voting today which is overwhelming favoring Republicans, so we’re looking to get some totals here,” Kauffman said.

Illinois State Board of Elections spokesman Matt Dietrich said voters need to be patient with the unofficial results.

“Keep in mind though that we will have probably at least 300,000 vote-by-mail ballots still out there that potential could come in and change those numbers in the two weeks to come,” Dietrich said. “It’s always been that way in Illinois, but this year more than usual so don’t be surprised if you see large leads, either maybe a race tightens, or maybe a lead is increased or maybe the lead changes between two candidates in a close race, especially in some of our legislative races, and some of our county races.”

“Let me tell you, this is the most unusual victory speech I’ve ever given, sitting in my home in Springfield staring into an iPad,” Durbin said. “I’ve never had a party this sedate in the past, but it reflects the reality of this election year and the reality of America today.”

He said the issues are clear.

“I think those two issues, healthcare, coronavirus and bringing this economy back, really are the priorities most people identify,” Durbin said.

Pritzker is one of the billionaire heirs to the Hyatt Hotels empire, making him one of the richest people in Illinois. He’s donated more than $178 million into his political committee in Illinois and is the primary funder behind the campaign for the progressive income tax ballot initiative.

He’s also the second-largest contributor to the Democratic Party of Wisconsin in the last quarter-century, according to campaign contribution records there. Pritzker donated nearly $2.5 million to the political committee in June.

A Pritzker campaign spokesman told the Chicago Sun-Times that the governor wants to help Democrat Joe Biden win the presidency and states like Wisconsin and Michigan, where he’s also contributed, are key battlegrounds.

He thanked supporters and asked those who voted for another candidate to look for issues they could agree on.

Supporters had 45% of the vote while opponents had 55% of the 271,059 votes reported, according to the New York Times.

7:55 p.m. National Guard at the ready in Illinois

With the election over, there are concerns that violent demonstrations could spring up.

“We’ve been in contact with virtually every law enforcement agency in the entire state, we have the state police of course, which are the best in the nation, they are on duty, and the Illinois National Guard has been put into a state of readiness just so if needed by local officials they could respond relatively quickly,” Pritzker said.

Chicago is boarded up this evening in preparation for possible civil unrest.

City officials raised the bridges that lead to Trump Tower shortly before 7 p.m. and have placed barriers in strategic areas across the city, according to emergency management officials.

The city’s Office of Emergency Management and Communications released a statement saying all other streets will remain in operation for now.

The raising of the bridges brought comparisons to the 2005 movie Batman Begins. Shot in Chicago, Gotham City officials raised the bridges to protect others from a riot caused by a mob.

In the race for U.S. Senate, Democratic incumbent Dick Durbin, who has four opponents, shared some news with a virtual event hosted by Democratic Naperville U.S. Rep. Bill Foster.

“I’m sitting here in front of my television trying to figure out whether I won or lost and AP says I won, so I wanna give my first speech to Bill Foster and his friends, thanks for your friendship, thanks for your leadership,” Durbin said. “We’ve got a lot of work to do tonight before we rest. I hope we end up with a Democratic Senate and certainly with President Joe Biden.”

With millions spent from both sides of the progressive tax amendment, the final election results are highly anticipated.

J.B. Pritzker says the tax would generate over $3 billion dollars in new annual revenue, but Todd Maisch, president of the Illinois Chamber of Commerce, disagrees, saying people will flee the state with their money. If 60% of people voting on the amendment approve it, or if a simple majority of all voters, including those who skip the question on their ballots, approve it, the measure passes.

Polls have closed across the state and the work of tabulating the votes is underway.

Illinois State Board of Elections spokesman Matt Dietrich said it’s likely there will be at least 300,000 mail-in votes that won’t be tabulated tonight. Many of those might still be in transit to local elections authorities, and over the next two weeks, those votes could affect the outcome of close races.

Dietrich also said there haven’t been many irregularities outside of long lines, replacement of some malfunctioning equipment, and other things that typically happen with elections. But, in the era of COVID-19, Dietrich highlighted some unique problems, such as voters who were in quarantine who recently tested positive for COVID-19 still needing to vote.

Even with most of the state under restrictions that aim to reduce the spread of COVID-19 amid a resurgence of the virus, the polls remained open. Gov. J.B. Pritzker noted during his COVID-19 update today that it is a state holiday.

“As a result, local election authorities that use schools and college buildings as polling places have less foot traffic in and out of those facilities, another effort to reduce possible exposure to coronavirus while you’re out casting your ballot, keeping people safer,” Pritzker said.

One measure lawmakers passed this spring was expanded mail-in voting. The Illinois State Board of Elections reported nearly 2.4 million ballots were mailed out. As of midday on Tuesday, more than 1.8 million of those have been returned to local officials. Even before the polls opened Tuesday, there were more than 1.9 million voters who cast their ballot. There are more than 8.3 million registered voters and some have predicted record turnout for this election.

The governor urged voters looking for election results tonight to be patient.

“We can expect to get results on probably Wednesday, or Thursday, or Friday, and there will be an official finalized tally announced by Nov. 17,” Pritzker said.

While voters wait for results, they won’t be inundated with political ads. Isaac Wink, an analyst with Reform For Illinois, said the governor spent tens of millions of dollars on the proposed income tax change voters are sounding off on. Opponents also spent big money.

“You’ve got Gov. Pritzker putting $58 million into the pro side and you’ve got Kenneth Griffin giving about $54 million on the anti side,” Wink said. “So, that’s over $110 million just on that ballot question alone, which is the most expensive ballot initiative that we’ve seen in Illinois history.”

For statehouse races, Wink noted a large disparity in spending by the Democratic majority and minority Republicans.

“[Illinois House Speaker] Mike Madigan, to his personal campaign committee, he’s gotten $17.6 million since the last election,” Wink said. “For comparison, House Minority Leader Jim Durkin, a Republican, has gotten a little over $4 million, so that really goes to show the difference in what they’re able to do to support their caucuses.”

Brett Rowland has worked as a reporter in newsrooms in Illinois and Wisconsin. He most recently served as news editor of the Northwest Herald in Crystal Lake, Illinois. He previously held the same position at the Daily Chronicle in DeKalb.

Reports: 20 federal agencies have wasted $2.3 trillion in taxpayer money in improper payments since 2004

Op-Ed: Home title theft? You may already be a victim ... of the scary ads