(The Center Square) – Three children in Effingham County can’t be forced to wear masks without an official quarantine order from the county health department, a judge ruled Wednesday.

Later in the day, a different judge enjoined an entire school district from requiring masks without a court order.

The attorney who brought the cases anticipates more such cases across the state.

Earlier this month, attorney Thomas DeVore won several cases on behalf of parents of school kids being kept from in-person learning because of possible COVID-19 exposure.

On Wednesday, DeVore took a different case a step further and successfully argued in Illinois’ Fourth Judicial Circuit that masks are a medical device that can’t be required without quarantine orders.

“The court said quite clearly that a mask is a device that’s intended to limit the spread of a disease so it is a quarantine by definition and you cannot require anyone, students in this particular case, to wear that unless there’s consent of the parent or court order,” DeVore said after the Effingham case.

"Plaintiffs have shown they will suffer irreparable harm if an injunction does not issue, namely the children being refused access to their education unless they unwillingly utilize a device to allegedly prevent the spread of an infectious disease even in the absence of a quarantine order against them,” the judge's temporary order says. “Nothing in this order shall prohibit the local health department, or the Illinois Department of Health, from issuing a lawful order of quarantine against any or all of the children as allowed by law.”

The Teutopolis school district, where the three students attend classes, did challenge the issue, DeVore said.

“Their fight was in essence that the governor’s executive order is compulsory on them, that they have to follow it and if they don’t follow it that they've been threatened to have their recognition status suspended by the [Illinois] State Board of Education,” DeVore said. “Notwithstanding that, the court still said the law is what it is and that a mask is by definition a device to limit the spread of disease, which is a type of quarantine under the law.”

Later in the day in Clinton County a circuit court judge issued a temporary restraining order against Carlyle school district. The afternoon order DeVore obtained on behalf of parents says, “While the children are on school property, the defendants, are enjoined from requiring any or all of the children who attend within the school district to utilize any type of device, including a mask, for the purposes of allegedly preventing the spread of an infectious disease unless an order of quarantine has issues against any or all the children from the local health department.”

DeVore later on a live stream encouraged others across the state to take his pleadings and use them as a template for parents to assert their rights.

Next is challenging regular COVID-19 testing and looming vaccine mandates. DeVore said the quarantine law that’s been on the books for years is clear.

While recent legal victories were only for specific children, he expects parents across the state to assert their rights.

Gov. J.B. Pritzker said his mask mandate is necessary to slow the spread of COVID-19. 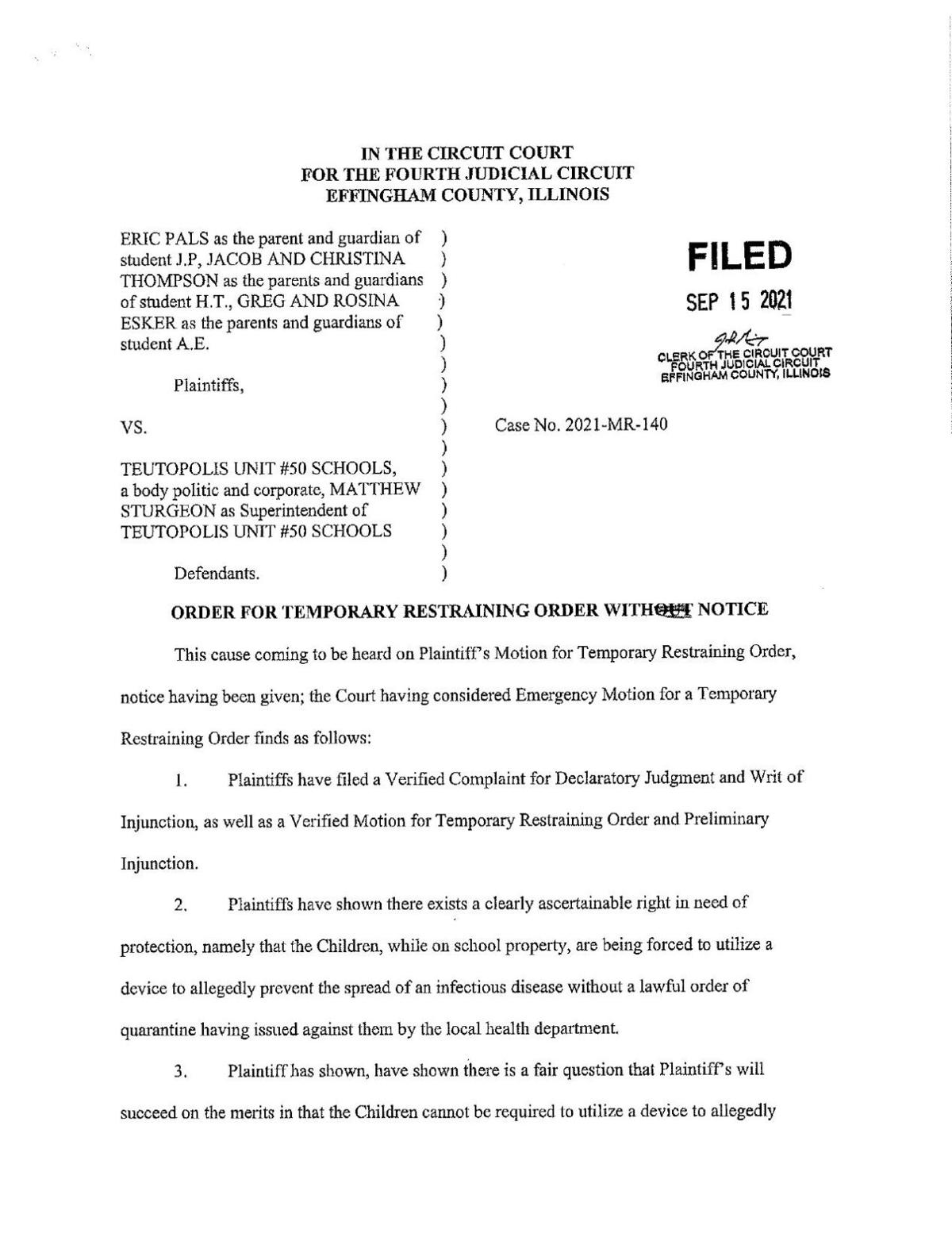