You are the owner of this article.
Edit Article Add New Article
Home
About
States
National
1 of 5

An email to Gov. J.B. Pritzker from Emily Bittner about removing Confederate Railroad from the DuQuoin State Fair 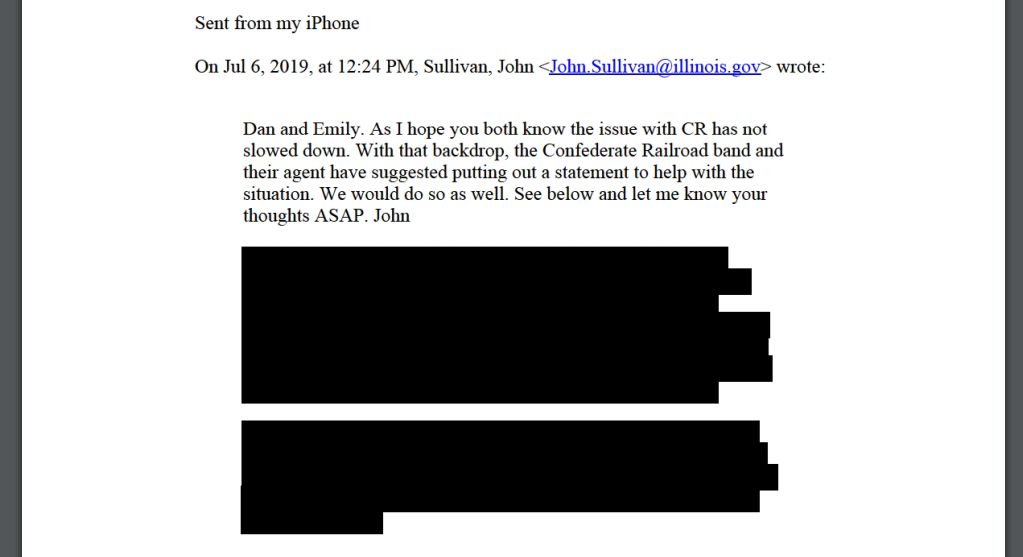 An email to Gov. J.B. Pritzker from Emily Bittner about removing Confederate Railroad from the DuQuoin State Fair

A promoter and the founder of Confederate Railroad tried to quell controversy and convince state officials that the country group wasn't political or racist, but Gov. J.B. Pritzker's administration canceled the band's performance at the DuQuoin State Fair the day before tickets went on sale, according to internal emails.

The emails, obtained through the state's Freedom of Information Act, show how a single act at the smaller of Illinois' two state fairs quickly became national news that had the full attention of the governor's office. Weeks after the band was pulled from the lineup, Pritzker said the use of the Confederate Flag on the band's album cover isn't tolerated in Illinois because it is a symbol of hate.

Pritzker's office fielded more calls about the cancellation than any other issue in the days after the news spread. The decision-making process that led the governor to cancel Confederate Railroad's scheduled performance at the DuQuoin State Fair began weeks before news of the decision was made public.

A press secretary for the governor relayed a question about whether Confederate Railroad’s performance was appropriate on June 17.

“They have Confederate flags on their most recent album cover,” Pritzker's Deputy Chief of Staff for Communications Emily Bittner wrote in an email.

Promoter Travis James wrote in a June 18 email that none of the songs in the band’s catalog were racist. He also noted that the group didn't tour with the Confederate flag as a stage backdrop.

“This is a rarity,” James said. “Very occasionally, I have had this surface … This band has been around for 30 years, and nothing in the catalog point to any racial overtone or undertones. Never been political, and work more than any band we represent.”

The band used the Confederate flag on its most recent album cover.

James said although he’d booked the band for “a few motorcycle clubs,” he had never “had a supremacy group every (sic) inquire -- not once.” He said “they don’t attract ‘racists’ in my experience.”

“A few groups today tour flags as backdrops … and this band doesn’t and never has,” James wrote.

Band founder Danny Shirley wrote in an email forwarded to the governor’s office the name wasn't a political or racial statement. He said he chose the name Confederate Railroad instead of his solo act name more than 30 years ago.

“I was born & raised in Chattanooga, Tn and was living in Kennesaw, Ga at the time,” Shirley wrote. “Kennesaw is where the locomotive The General is on display at The Southern Museum of Civil War & Locomotive History. In 1862 the General was hijacked in Kennesaw & recovered just outside of Chattanooga. This was the inspiration for the band being named Confederate Railroad, a connection between where I was raised & where I now live.”

Shirley wrote that “only recently has the name of the band come into question” after performing thousands of shows over more than three decades, mostly at family friendly events.

“People of different backgrounds, races & political affiliations have attended our shows & have always been welcomed,” he wrote. “The name of the band was never intended to be taken as a political or racial statement. Hopefully this will clear up any misconceptions.”

The following day, partially-redacted emails show the governor was informed by his staff that they expected questions from reporters.

“Governor: The Department of Ag will be sharing the following statement for any inquiries concerning terminating its contract with Confederate Railroad,” Bittner wrote. The statement was redacted. The state's Freedom of Information law allows for redactions for preliminary drafts, notes, recommendations and number of other exceptions.

There were also notes to expect media inquiries about Confederate Railroad when additions of other performers to the fair lineup were announced June 26.

“Great! Thanks,” the governor responded.

Over the Independence Day holiday, news broke that Confederate Railroad's performance was canceled.

“As I hope you both know the issue with [Confederate Railroad] has not slowed down," Illinois Department of Agriculture Director John Sullivan wrote to Bittner on July 6. "With that backdrop, the Confederate Railroad band and their agent have suggested putting out a statement to help with the situation. We would do so as well.”

Sullivan shared his suggestion, but that part of the email was redacted.

Asked about the decision, Sullivan said there had been a lot of discussion about the issue, but he said canceling the performance was the right call.

“It’s not the band, it’s not their songs, it’s certainly not the people that are in the band, it was the Confederate flag itself and what it represents and that’s what we don’t want reflected here and supported here in the state of Illinois,” Sullivan said.

On July 9, a day after state Rep. Terri Bryant, R-Murphysboro, shared on her Facebook page details of a conversation she had with Pritzker’s staff regarding the issue, internal emails show questions from news reporters began to pour into the governor’s office.

Bryant, among others, took issue with what he said was a double standard that Snoop Dogg was being allowed to perform in Springfield at the Illinois State Fair despite using controversial imagery showing a body on a gurney with a toe tag “Trump” and the words “Make America Crip Again,” a reference to gang violence and President Donald Trump.

“Regarding Snoop Dogg: This symbol of hate, oppression and bloodshed [the Confederate flag] is categorically different from political satire,” Pritzker's Press Secretary Jordan Abudayyeh said in a July 9 email to a reporter.

A message to the the governor's press secretary from The Center Square July 9 about the double standard was not returned, nor was a forward of the original request for comment July 10.

On July 10, Pritzker was asked about the cancellation by reporters in Chicago.

He echoed Abudayyeh, when pressed on whether Snoop Dogg was appropriate for the Illinois State Fair.

“There is an enormous difference … between the political satire, the discussion by a single artist, his political views and the representation of truly millions of people being enslaved, hundreds of thousands of people being killed under the banner of treason, essentially,” the governor said.

Amid a flurry of other internal emails and media requests for comment about the issue, a July 10 email shows 31 calls opposing the cancellation of the Confederate Railroad performance while 27 opposed Snoop Dogg’s performance.

Since the controversy, Confederate Railroad has booked other shows, including one in Marion, Illinois, Sept. 5 at Black Diamond Harley Davidson.

Confederate Railroad was later pulled from the lineup at the Ulster County Fair in New York. Despite the second cancellation over the use of the Confederate flag in the band's logo, Shirley said in a statement to news outlets that "the name of my band ain’t gonna change."

Funding for arts agencies in Illinois to reach $22.9 million in FY2020