(The Center Square) – A commission of state lawmakers designed to help rebuild Illinois' economy in the wake of the COVID-19 pandemic met for the first time last week.

It has another meeting set for Tuesday, but it will be closed to the public.

Instead of passing laws codifying or challenging Gov. J.B. Pritzker’s executive orders to reduce the spread of COVID-19, state legislators in May passed a law to create the Restore Illinois Collaborative Commission. The commission has more Democrats than Republicans.

The commission met for the first time last week, after the group’s first monthly report was issued. Another meeting is scheduled for Tuesday.

State Sen. Laura Murphy, D-Des Plaines, is one of the co-chairs of the committee. She said things are going well, but it won’t be open to the public yet.

“I would define it currently more of a working-group environment,” Murphy said. “Should we go to a hearing then I think we would have a more public environment.”

State Rep. Dan Caulkins, R-Decatur, is among the Republican minority on the commission. He said Republicans could barely get their voices heard at the first meeting.

“I think it was collegial. I don’t know how collaborative it was,” Caulkins said.

He characterized it as a “sham,” or more of a press conference than a meeting where elected representatives could hold Pritzker administration officials accountable.

Murphy said they’ll meet every Tuesday. That’s after the first meeting with the Department of Public Health lasted for just 75 minutes.

“There were a lot of people who’s questions did not get answered simply because we ran out of time,” Murphy said.

Caulkins said if future meetings are like the first meeting, this will be a disservice to residents living under restrictions promoted by the governor.

“What is the General Assembly doing with our advice and consent role,” Caulkins said. “As you see here now, nothing, we’re still being pacified so to speak but we’re not really having any input.”

Caulkins said he wants public hearings with not just agency directors, but middle management employees who are doing the day-to-day work.

Tuesday’s meeting is expected to be focused on unemployment.

In the second monthly report to the commission from the Illinois Department of Commerce and Economic Opportunity, the Pritzker administration laid out resources it has made available from federal and state funds for distressed communities, small businesses and renters. The 12-page report also outlines the eleven new regions the governor created since the last report.

“We’re thankful we’re back to at least eleven regions instead of four but it’s still way too broad,” Caulkins said, noting Republicans have pushed for a more regional approach. “If you noticed what’s happened they’re now talking about counties and where the hot spots are so perhaps we’ve had some impact. Don’t know if that’s enough. But it was a bit of progress.”

Reports are due every 30 days until the commission is dissolved by law at the end of the calendar year. 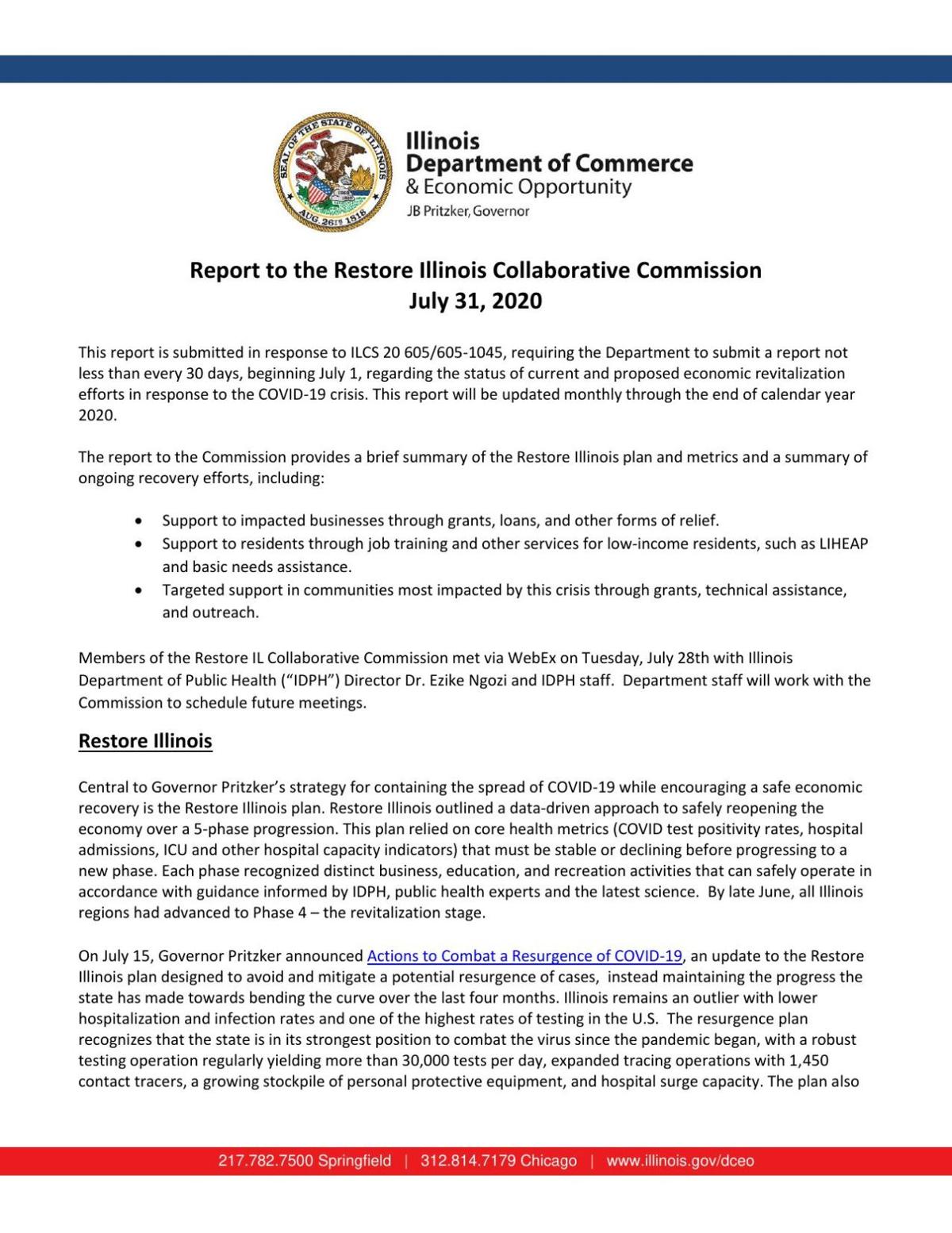