The woman picked to replace a state lawmaker who resigned after being charged with bribery could face discipline and possible removal amid questions about the integrity of the process to select her.

There are growing bipartisan calls to remove the Illinois state representative selected to fill the vacancy left by Luis Arroyo, who resigned after he was arrested for bribery.

Arroyo, D-Chicago, pleaded not guilty to bribery last week. He was arrested in October 2019 and resigned the following month. Some have questioned Arroyo's role in picking his replacement, Eva Dina Delgado. Members of both parties have filed petitions to challenge her qualifications.

Before Delgado was selected, House Speaker Michael Madigan in November sent the committeeman of the 36th Ward in Chicago a note that said Arroyo shouldn't be involved in the selection process.

“Whether a direct vote or a vote by proxy – would cause the candidate’s qualifications to be challenged by the full Illinois House of Representatives,” Madigan said.

Delgado was selected Democratic party officials in that district on Nov. 15.

Stava-Murray said in her petition that Delgado’s husband was appointed to a “position of influence” with the Latino Caucus.

“[T]he process and subsequent appointment created by that process indicated the political sway that a person alleged to have engaged in brazenly clear bribery (and known amongst House colleagues to repeatedly ask ‘what's in it for me?’) retained even while vacating the House seat to which he had been elected,” Stava-Murray said.

Earlier this month, House Minority Leader Jim Durkin, R-Western Springs, filed a petition that laid out the timeline of Arroyo’s charges and subsequent resignation, and the questions around Arroyo giving his local party votes to someone else to cast for his replacement.

“Mr. Arroyo gave his proxy votes to Alderman [Ariel] Reboyras to be used towards choosing Ms. Delgado,” Durkin said. “Although Mr. Arroyo was not present for the actual vote, his decision to give his votes to be voted by proxy had the same effect as if he was present at the actual vote to fill the vacancy.”

Durkin said if Delgado, who was chosen to replace Arroyo on Nov. 15, was not removed from the House that “everything … will be viewed in a negative light should the individuals who are arrested for illegal activities have a part in the selection process.”

“A clean break from the arrested legislator is required to re-establish the General Assembly’s trust with its constituents,” Durkin said. “Had the votes of Mr. Arroyo not been part of the selection process, this appointment would not be called into question.”

“I believe the next step will be the appointment of an investigative committee to make a recommendation if they believe there’s a reason for discipline,” Harris said.

Such a committee has yet to be announced.

“If they recommend there be some action taken, it’s then sent to a disciplinary committee, which then has to decide which is the appropriate level of discipline,” Harris said.

"While clouds of indictments and insider deals catch headlines, the real narrative here is that I am the most qualified candidate to represent the 3rd Legislative District and there was not one vote cast against my appointment," Delgado said in a statement.

"My appointment followed the law every step of the way, and I am confident that my qualifications as an attorney, community leader and experience in the public and private sectors will withstand any challenge," she said. "While this filing is disappointing, I remain focused on representing the interests of the hard-working people of the district I am honored to represent."

Delgado is running for the 3rd House District seat in the March 17 primary and just picked up the endorsement of Chicago Mayor Lori Lightfoot over Nidia Carranza, Joaquin Vazquez and David Feller. 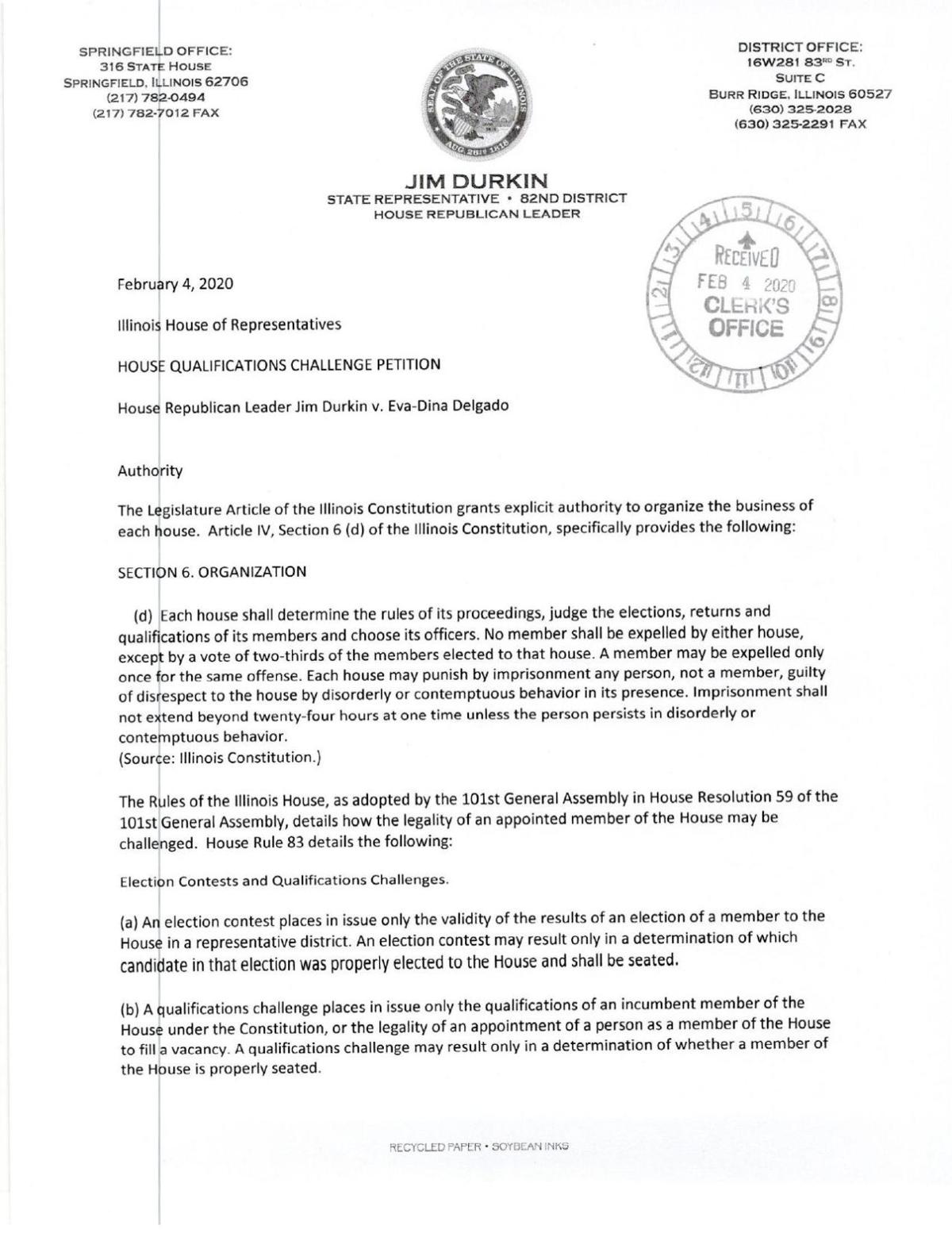 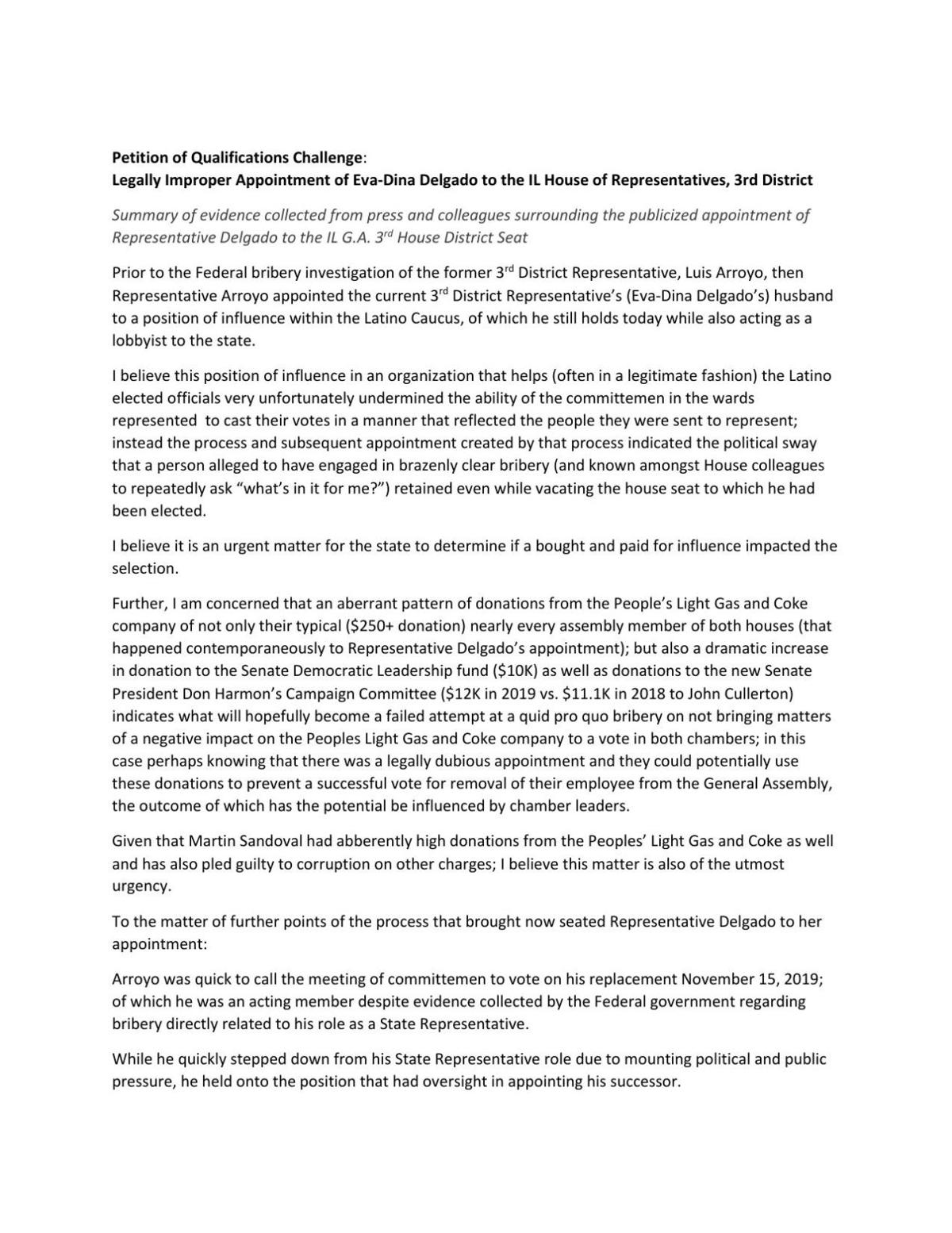 Chicago has liabilities equaling $37,100 per taxpayer, 2nd worst in U.S.

Cost of a childless divorce in Illinois is $13,800

Analysis: Cities with the most successful entrepreneurs

Democratic presidential hopefuls go after each other in Nevada

Sen. Toomey of Pennsylvania pushes for legislation to make it easier to donate food for needy