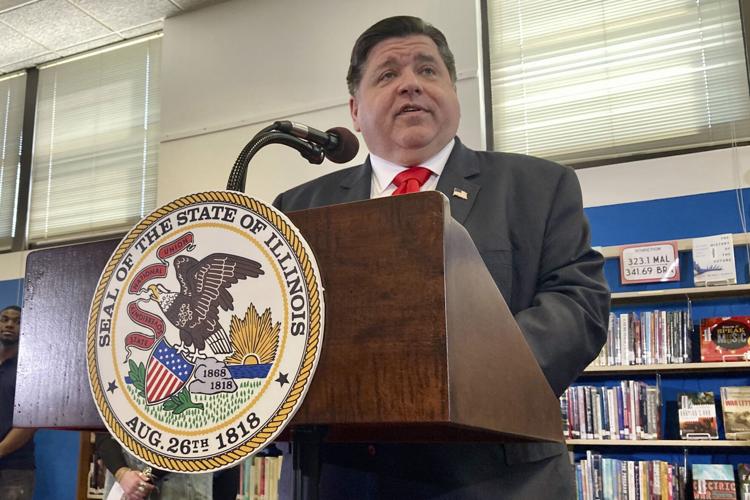 Illinois Gov. J.B. Pritzker speaks at Springfield High School Wednesday, April 27, 2022, in Springfield, Ill., about legislation he's about to sign to make it easier for qualified professionals to become teachers. Educators estimate there will be 4,100 unfilled education positions in public schools at the start of the school year this fall.

A chart of the Illinois State Board of Education's Educator Supply and Demand report. 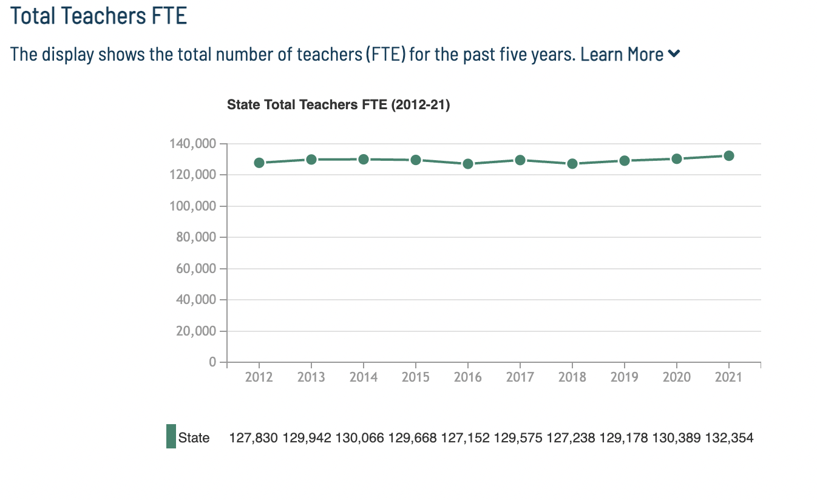 (The Center Square) – Illinois schools employed more teachers in 2021 than it had at any point over the past decade while student enrollment declined over the same period. Despite this, lawmakers say the state is experiencing a teacher shortage and they continue to look for solutions to the perceived problem.

"Like many states across the country, Illinois is currently experiencing a teacher shortage," Liam Chan Hodges, media coordinator for the Illinois State Board of Education, said.

The most recent report from the Illinois State Board of Education on teacher supply and demand found that 99% of teaching positions were filled in 2020 and that vacancy rates were highest for bilingual and special education teachers. Even in those more-difficult-to-fill positions, the vacancy rates remained below 3% in 2018, 2019 and 2020.

"I think whether there’s a true 'shortage' is more localized," said Nathan Hoffman, director of state policy and legislative strategy for the American Federation for Children, a Washington D.C. group that advocates for school choice. "For instance, a district with 2,500 students where 10 teachers still need to be hired is much more impacted than a district with 15,000 students and the same 10 openings. Some districts are more equipped than others to absorb unmet hiring demand."

Despite Illinois having more teachers and fewer students, education groups and teacher unions continue to raise concerns about what they say are shortages in the state. And politicians continue to pass legislation to address those perceived concerns.

A study from the Illinois State Board of Education submitted to the state Legislature shows vacancy rates for the most in-demand positions stayed relatively flat from 2018 to 2020. The State Board of Education's 2020 Educator Supply and Demand Report found the highest number of vacant positions and the highest vacancy rates were for special education positions.

The Illinois State Board of Education reported 29,235 filled special education positions in 2020. That year, there were 753.3 unfilled full-time positions for a vacancy rate of 2.5%. But most subject areas had far lower vacancy rates. For elementary positions, the vacancy rate was 0.2%.

"Unfilled full-time equivalents were proportionally distributed across Illinois, with the exception of Chicago, which is primarily comprised of Chicago Public Schools," according to the state report. "CPS accounts for about 16% of Illinois’ public school teachers, but about 40% of Illinois’ unfilled full-time equivalents, instructional or otherwise."

Overall, the state's vacancy rate for the top 10 instructional subject or program areas by unfilled full-time equivalents totals was 0.75%.

Hoffman said special education, bilingual, higher-level math and sciences have always been more difficult to fill than other teaching positions.

"The truth of the matter is the teaching profession is not keeping pace with the private sector in terms of being an attractive career pathway in 2022 and beyond. The teaching profession is stuck in 20th century thinking thanks entirely to the politically powerful unions that represent the teaching force and those who have gone along in state legislatures and other decision-making bodies," he said. "We need a jolt of innovative energy to identify ways to make teaching an attractive career pathway, though we shouldn’t wait for unions to step up to the plate on this."

Even though state data shows more than 99% of teaching positions were filled in 2020, according to the state's most recent triennial report on educator supply and demand, the majority of educators remain concerned about shortages.

The Illinois Association of Regional Superintendents of Schools' 2021 Illinois Educator Shortage Study found that 88% of the school districts surveyed believed they have a teacher shortage problem. And 93% were "concerned about future shortages." That study also found that Illinois school districts canceled 412 classes in 2021 and converted an additional 385 to online classes as a result of shortages.

Illinois Association of Regional Superintendents of Schools President Mark Klaisner told The Center Square that for as long as the organization has been watching teacher trends, the shortage gets worse every year. Klaisner said the increase in teachers in recent years could be the result of federal stimulus money given to schools in response to the COVID-19 pandemic.

"I don't have hard data, but what I see and what I hear around the state is that a lot of that was due to some of the creative measures ISBE took, but districts also had a great deal of stimulus money – money from the feds – so they were hiring additional teachers to bring class sizes down, to do tutoring, to do supports, to do interventions, so during COVID, schools literally had more money than they knew what to do with and so they were hiring as many as they could."

"It's almost like a false positive in my mind because those numbers going up, I think they are largely due to the federal stimulus," Klaisner said. "It's interesting because the numbers are going up and yet, just this spring, a couple of months ago, ISBE reported 5,000 unfilled positions."

"Fewer kids, more teachers sounds like a great deal, but how are they prepared? How are they licensed? How are they endorsed? What's their level of expertise? There are all of those additional pieces," Klaisner told The Center Square.

"Those union contracts are negotiated for all licensed teaching staff, so in any union contract, you wouldn't have the flexibility to say 'this category gets more,'" he said. "Teachers are teachers and they all fit into a chart, so if you have a master's degree and have been teaching for five years, you are making the same amount as the teacher next door."

A spokesperson for the Illinois State Board of Education said an analysis of unfilled positions found they affect underperforming schools.

"This analysis found that the current shortage has a disproportionate impact on chronically struggling schools, underfunded schools, and schools serving low-income communities, as well as specific subject areas including special education and bilingual education," said Hodges, the media coordinator for the Illinois State Board of Education. "The data reinforce the importance of equity as the driving strategy for continuing to strengthen the teacher pipeline in Illinois."

He also said the "teacher workforce in Illinois has grown year-over-year since 2018, adding more than 5,000 new teachers to the profession."

Hodges said the state reported an 11% increase in enrollment in educator preparation programs between 2019 and 2020, and that in 2021, teacher retention rates rose to over 87%, the highest since 2014.

Hoffman said the idea of a teacher shortage has been overhyped.

"So, is the idea of a teacher shortage overblown? Perhaps, insofar as I think there are advocacy efforts being made to paint this as more grandiose and disruptive than it likely is on the ground, which the unions hope will further their political and legislative agendas regardless of whether the solutions they demand actually address the problem or not," he said.

Hoffman said changes need to be made to teacher compensation and the educator pipeline.

"At minimum, two things we should look at are (1) permanently unlocking alternative pathways into the classroom to bring in talent from different sectors and (2) differentiating compensation to ensure these in-demand positions are compensated at a level consistent with their demand value, not necessarily the archaic pay scale tied to seniority and education," he said. "The challenge has been overcoming folks in the education establishment, like the unions and other aligned and/or sympathetic organizations, who have slow-rolled if not entirely blocked efforts to differentiate pay and other compensation as well as alternative pathways into the classroom."

Lawmakers also remain concerned. Lawmakers have passed a number of measures in recent years to address the perceived shortage of educators. In April, Gov. J.B. Pritzker signed a package of bills to simplify the licensing process for educators, lower licensing fees and create opportunities for prospective educators.

Brett Rowland is an award-winning journalist who has worked as an editor and reporter in newsrooms in Illinois and Wisconsin. He is an investigative reporter for The Center Square.