Your gift helps us inform citizens through up-to-the-minute facts about their state's specific plan to curb the spread of COVID-19. 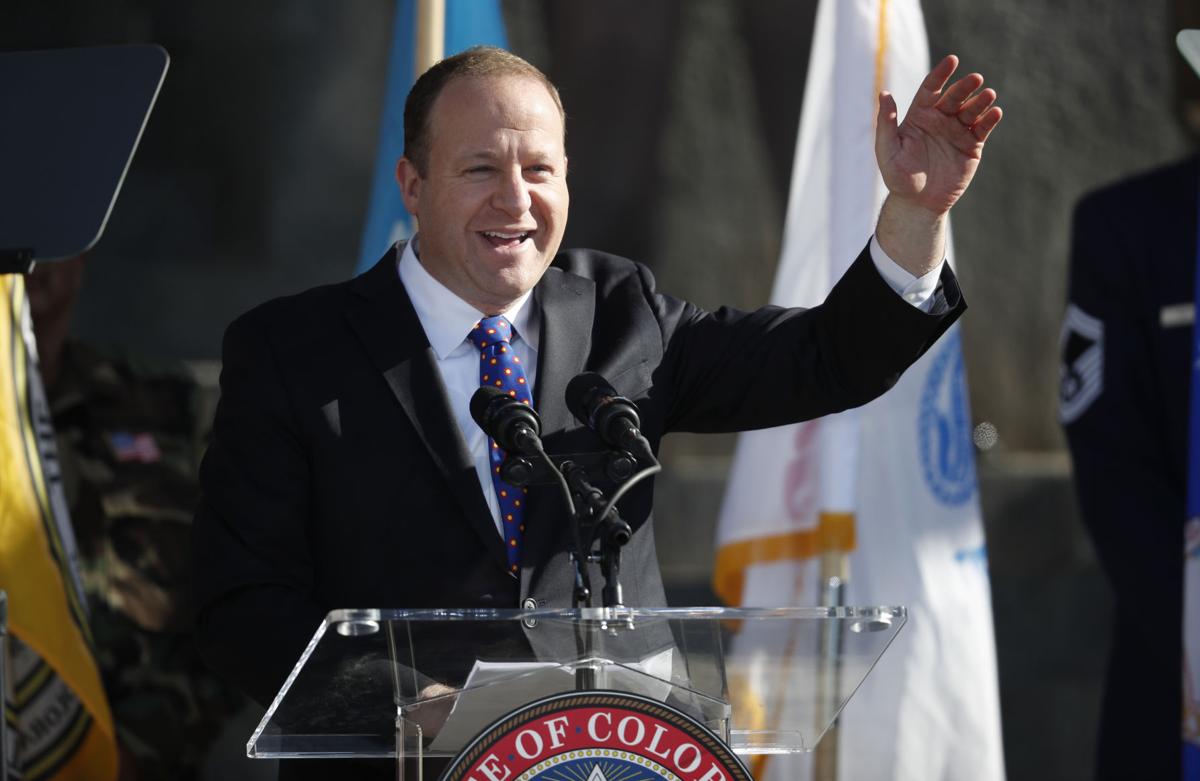 Colorado Gov. Jared Polis waves to the crowd after concluding his speech during his inauguration ceremony Tuesday, Jan. 8, 2019, in Denver. 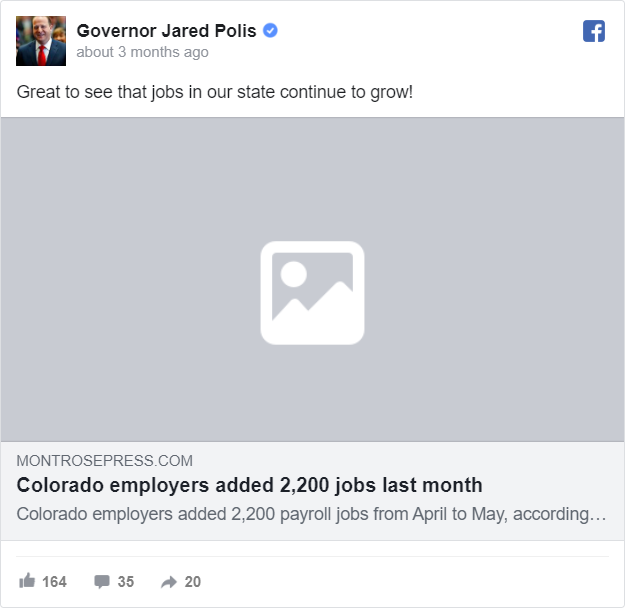 A screenshot of a post from Gov. Jared Polis's Facebook page linking to a story from The Center Square republished by the Montrose Daily Press. The story link is no longer active on the Montrose Daily Press' website because the content sharing system it uses sunsets shared stories after seven days. The newspaper did not manually unpublish the story.

The office of Gov. Jared Polis asked editors of two Colorado newspapers to unpublish a news story by The Center Square that raised the question of the cost of a new office Polis created and included a comment from a Senate GOP spokesperson criticizing the fact it was the third new office created this year.

The governor's office did not alert The Center Square to any errors in the Sept. 4 story, headlined “Polis creates ‘Office of Future of Work,’ third new taxpayer-funded office this year," and no corrections were published.

After learning of Cahill’s communication to one editor, The Center Square filed a Colorado Open Records Act (CORA) request with the governor’s office seeking all recent communications that name the nonprofit online news service. The email communication with the second newspaper was discovered in the CORA response.

“I see you have run a recent article published by The Center Square which is not a reputable news source,” Cahill emailed to editors of the Kiowa County Press and The Chronicle-News in Trinidad. “Would you consider removing it?”

“No. I see no issue with the story,” The Chronicle-News Editor Eric John Monson responded, according to emails obtained by The Center Square through its CORA filing. “Very surprised you would make such a request.”

In a later email to The Center Square, Monson said he’d “never seen anything like this before.”

Monson also said he vetted The Center Square before deciding to republish its work.

“I checked you guys out before we started using your stories,” he said in an email to Derek Draplin, Colorado news editor for The Center Square. “Really, just a little shocked and dismayed to get something like that from a state office.”

“Pending clarification, I suspended the article from the website,” Sorensen responded, according to the CORA documents obtained by The Center Square. “Is there a factual error that needs to be corrected?”

Cahill did not answer Sorensen’s question in his emailed response to the editor. Instead, he provided a link to an op-ed published on a left-leaning advocacy website that inaccurately described The Center Square and its state-government-focused reporting efforts.

In an email to The Center Square, Sorensen said he decided to republish the story after Cahill’s response did not include a claim of a factual error.

“The whole interaction falls short of what I would expect from any spokesperson or press secretary, no matter which political party might be involved,” he said.

In June, Polis shared on his Facebook page a Center Square story republished by the Montrose Daily Press about jobs growth, commenting on the shared post, “Great to see that jobs in our state continue to grow!”

The story the governor’s communications team targeted in its email to newspaper editors included statements attributed to Polis, but it also included criticism from the Colorado Senate GOP and this sentence: “Details on what the new office will cost taxpayers were not released.”

The executive order signed by Polis to create the office says the Colorado Department of Labor and Employment "shall implement current fiscal year actions within existing budgets and authorities" but includes no other details.

The Center Square on Wednesday filed CORA requests with the governor’s office seeking those costs and the costs of two other newly-created offices this year.

The Center Square made several attempts via email and telephone to reach Cahill and Polis Communications Director Maria De Cambra to ask questions about Cahill’s emails, what concerns they had with the story and why Polis would share a Center Square story on Facebook if he did not consider the news source “reputable.” Neither Cahill nor De Cambra responded to any of the inquiries.

Chris Krug, publisher of The Center Square, criticized the actions of Polis’ staff in a statement.

“The governor’s office is trying to use the power of the government to kill stories it doesn't like. And as part of that effort, the governor’s office is trying to taint the sterling reputations of journalists who dare to write stories it deems critical or negative,” Krug said. “Here at The Center Square, we adhere to the highest journalistic standards. Our job as journalists is to keep the public informed about what is going on and the public deserves full transparency.

“The public has the right and deserves to make their own decisions about whether the happenings in state government are good or bad. It’s not up to a government official to police the news or try to withhold certain information from the public. The public also has the right to know why the governor’s office would overreach and ask editors to remove content it had published.”

Jeffrey Roberts, executive director of the Colorado Freedom of Information Coalition, said he was surprised by the emails from the governor's office but added there needs to be a larger conversation about today’s media landscape.

Roberts called The Center Square news story flagged by Polis’ team “fairly straightforward." The governor’s office, he continued, “is making a pretty big ask of a news organization to take down something that it already had decided to publish. Obviously, the news organization has the right to make that decision and publish what it wants."

With legacy media struggling and more nonprofit news agencies "with an agenda" cropping up, Roberts said the media landscape is more complex now and deeper conversations need to occur.

“I really do think if they feel like your coverage is not credible or trustworthy, they should have that conversation with you,” he said. “And explain that, or at least talk it through.”

This story has been edited since initial publication to correct the name of the Colorado Freedom of Information Coalition.

​Dan McCaleb is the executive editor of The Center Square. He welcomes your comments. Contact Dan at dmccaleb@thecentersquare.com.

Dan McCaleb is a veteran editor and has worked in journalism for more than 25 years. Most recently, McCaleb served as editorial director of Shaw Media and the top editor of the award-winning Northwest Herald in suburban Chicago.

Colorado earns score of 81 out of 100 on financial transparency